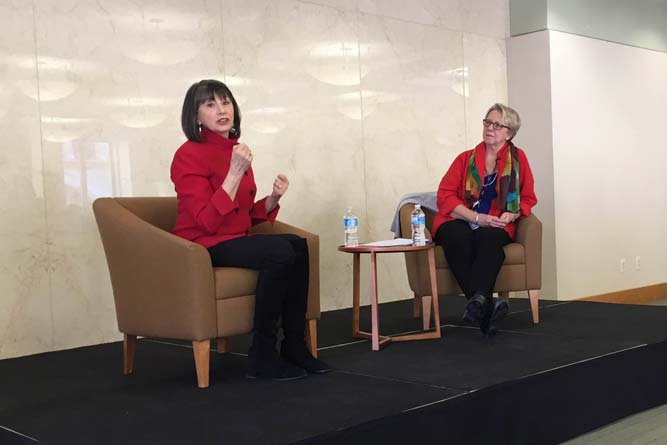 It was a Thursday evening a few weeks ago when I was standing at Stern’s weekly Beer Blast with a few of my female blockmates, sipping a nice lager and eating sushi courtesy of the Japan Business Association.

Of course, male or female, we all support each other regardless of gender and individual interests, but it’s impossible to ignore the success of these women and to not celebrate it. Especially in honor of Women’s History Month, here are some highlights on how all of my fellow female classmates are stepping up and shaping Stern for future classes (i.e. you!):

1) Employment/Recruiting: As companies put more effort into recruiting women, Stern women are jumping in, winning positions, and expanding Stern’s network across all industries and functions. Here’s a sampling of where current female students have interned, will be interning, or will be going/returning for their full-time offers:

2) Club Leadership: Stern’s 40+ clubs are each run by a board consisting of President/Co-Presidents, Vice Presidents (VPs), and Associate Vice Presidents (AVPs). You already have an idea of how my class is doing regarding female leadership for next year, but here’s some data on what the club leadership looks like this year: 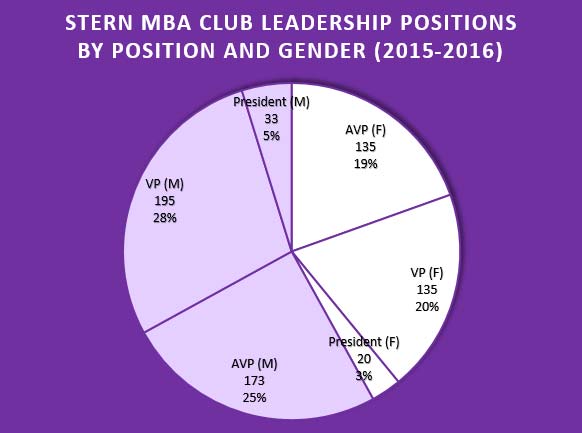 Among these positions is the board of SWIB, which boasts 32 female leaders in itself. Meanwhile, I didn’t count other leadership at Stern, such as Block Captains, Spring Break Trek Leaders, and students on various committees. (Also not counted in the above data are a few clubs that did not self-report their boards online.)

3) Culture/Events: To celebrate International Women’s Day on Tuesday March 8, SWIB hosted GIRLS WHO BOSS, Stern’s first Women’s Week. Events to support gender equality kicked off with a keynote address by Gloria Feldt, Co-Founder and President of the women’s leadership nonprofit Take The Lead and former CEO of Planned Parenthood Federation of America. Gloria discussed her nonprofit and how to promote gender parity in the workforce.

This event was followed by “Toast to International Women’s Day” at one of Stern students’ usual haunts (Tuesday, 3/8), “Pizza, Beer, and Banter: A Free Form Discussion on Male Allyship at Stern (Wednesday, 3/9), and “Let’s Get in Formation: Dance Class with Stern Steps,” also at Stern (Thursday 3/10).

And all this follows SWIB’s successful conference last month, which featured a keynote address from Susan L. Jurevics (Stern MBA ’96), CEO of Pottermore (J.K. Rowling’s Harry Potter expansion site), and panels featuring Stern alumnae who have gone on to become CEOs and SVPs across various industries.

4) Admissions: SWIB is also making a concerted effort to bring more women to Stern. Last Fall, SWIB played an integral role in the success of Opening Doors for Women, an event that Stern hosts for prospective female students. I had the pleasure of helping out at the event, where over a light breakfast I got to casually chat with a handful of diverse female prospectives and tune in to a panel of three Stern alumnae, who offered their wisdom on how their MBA programs at Stern (Full-time, Part-time, and Executive) have shaped them both professionally and personally.

As one can see, Stern women and our male allies are dedicated to working to make Stern an even more inclusive place for women than it already is, and it’s efforts like these that help foster the kind of environment that allows the entire class to succeed in school, in business, and beyond. 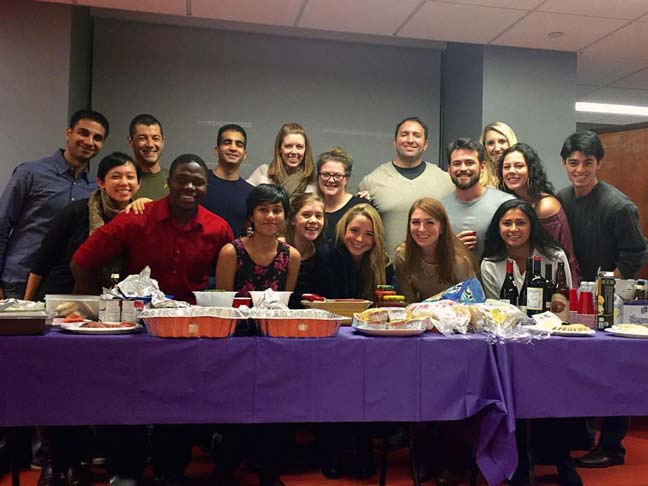 When you first start business school, you can’t necessarily comprehend the extent to which you will bond with your classmates and your blockmates in particular. It has now been five months since I first met this astonishingly diverse group of people, and I am reluctant to imagine what my life would have been like had Stern not brought us together in this one place at this one time.

Before school started, there were some self-organized gatherings. The air was warm, the days were still long, and the trees in nearby Washington Square Park were lush and green. Around the corner from Stern, 10 to 20 of us would meet up for Happy Hour and talk about what had become our pasts—where we grew up, where we last lived, what job we just quit (or still needed to quit).

I’m a born-and-raised New Yorker but was returning home from a three-year stint in Los Angeles, where I worked as a script reader, screenwriter, and director’s assistant. Many people had been living and working in the city in various occupations. Some grew up in the States, yet others were from places as far away as Taiwan and New Delhi—one had gotten off the plane just a day before, and his wife had yet to join him!

It wasn’t until LAUNCH when I met my block (Block 2!) in its entirety, all 67 of us. I was pleasantly surprised at how genuinely kind and down-to-earth everyone was (Stern definitely has the IQ+EQ thing down pat), but at that point, I still had no idea to what lengths we would go to befriend and support one another. 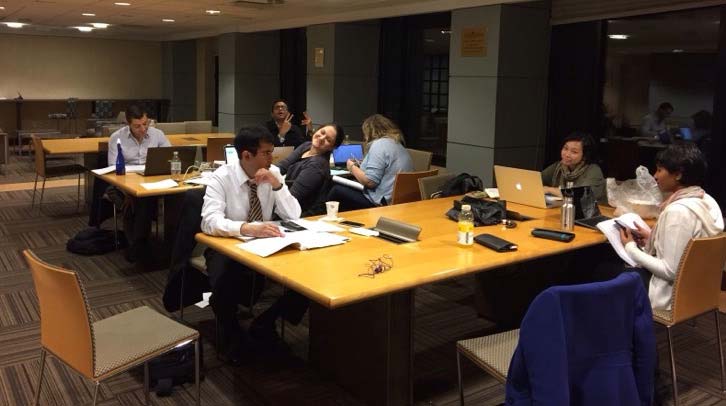 On an average night.

Fast forward past midterms, during which my blockmates and I took over the Starbucks Lounge even more so than we usually do (see above) to study together. Fast forward past a brutal recruiting season, during which we’d check in on each other and post silly things in the group messenger app to keep morale up. Fast forward to “Blocksgiving,” when a random bunch of us (and a few partners) came together before the weekend was over, on the eve of dozens of summer internship application deadlines, to share a homemade meal with each other.

At Stern no less.

Skip ahead to the last day of classes, when half of us celebrated by running down the street from Stern to our unofficial block watering hole and catching up with each other into the night. Then jump ahead one day, when we rallied together the next morning in a last-minute push to donate to Stern’s Toys for Tots Drive. I’m proud to say the effort was especially rewarding, for in addition to doing good, as the block with the highest participation we were awarded enough block points to clinch the Block Points Championship for the semester.

At this point I’m bragging, but how could I not? And don’t get me wrong—there are amazing people in the other five blocks too. But as I recall from Blocksgiving, sitting in a room at Stern with good company, laughing and trying not to choke on apple crumble and coconut cream pie, I thought to myself what I was thankful for, and my current situation came to mind.

I am thankful for Stern, for giving me the chance to challenge myself and to be among people who are brilliant in both heart and mind. I am thankful for my block for being so thoughtful, supportive, fun, and hilarious, truly (I could go on about our beer receivables and sock puppies but I don’t think you’d get it, sorry!). And I am thankful for these moments, now memories, shared by the lot of us, a wonderful group that would have had little reason to ever come together had we not been given the opportunity that we have now.

And as we come back from break, we hope you had the: 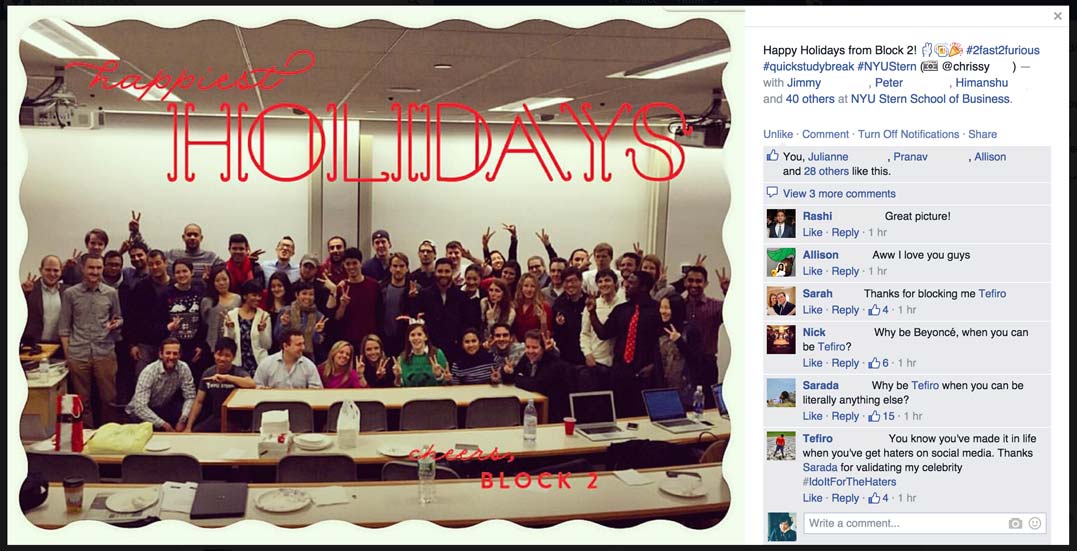