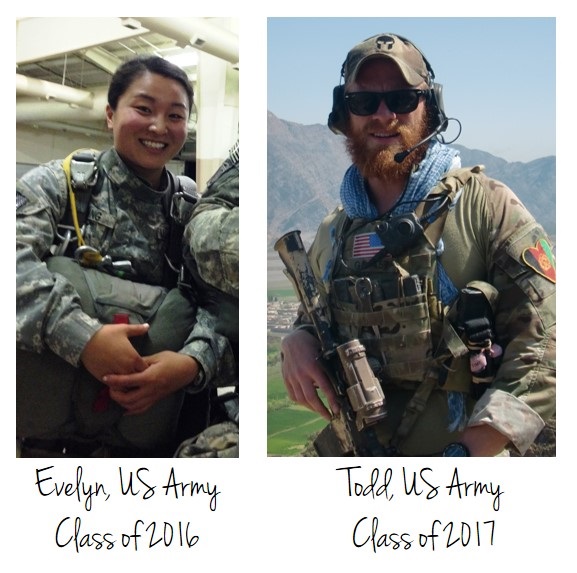 In honor of Veterans Day this November, I am proud to announce that the Military Veterans Club at Stern will be holding the first ever “NYU Stern Veterans Week” this year. We will have a variety of events for the Stern community such as an MBA veterans Q&A panel where Sternies can ask us about our military experiences, a bootcamp workout session, and a guest speaker event featuring a retired two-star general officer.

It was an easy decision that my second coffee chat in this blog should be with a fellow MBA veteran here at Stern. To give a fresh perspective to the Stern experience, I sat down with Todd Gardner from Lexington, North Carolina, US Army veteran, and full-time MBA1 student. Todd is currently recruiting for finance after spending the past seven years with the 3rd Special Forces Group out of Fort Bragg, North Carolina (Airborne!).

Evelyn: Hi Todd! Can you tell the readers how you and I first met?
Todd: We initially met at Stern’s Veterans Summit Day for prospective students in 2014. It was a fantastic event!

E: As military vets, our backgrounds are usually quite different than some of our classmates’. What did you do before Stern?
T: Prior to coming to Stern, I was working in the Army as a Special Forces Engineer, also known as a Green Beret. Some highlights of my job were going on three deployments to Afghanistan, becoming the team expert on everything related to explosives, working with some of the most talented and driven individuals I’ve ever met, and frequently jumping out of airplanes and helicopters. Okay, I’m lying about that last one – I always mildly hated it. But other than that, it was truly a dream job.

E: Like many of the blog readers, you were probably considering a few different MBA programs when applying. When did you realize that Stern was the right choice for you?
T: I first visited Stern through the previously mentioned Veteran Summit Day, “A Day in the Life” at Stern organized by the current MBA veterans. The more that I interacted with everyone in the Stern community, the more I realized that Stern really believed in admitting well-rounded students. Stern checked all of the boxes for things I really valued in a business school experience.

E: I know you’re only into your first semester, but what is your favorite class at Stern so far?
T: Foundations of Finance, with Professor Silber, has been my most enjoyable (and probably toughest) class so far. It’s challenging, but interesting, and I think that he’s an outstanding and extremely engaging professor.

E: Now on to the really important questions … Where is your favorite place to grab lunch around Stern?
T: Coming from the South, I was extremely hesitant to move to NYC because of the depressing lack of Chick-fil-A’s in the city. As it turns out, the only one in the entire city is only two blocks away. So yeah, I guess that’s my favorite. (Editor’s note: As of Oct 3, the Chick-fil-A flagship in NYC opened in Midtown. See you in line, Todd!)

E: Complete this sentence “When I have 30 minutes free on campus I like to …”
T: You can usually find me in the school lobby, where it’s nice to run into friends and catch up for a bit between classes.

E: Quick fire question time! KMC elevator or stairs?
T: Stairs, but my cutoff is the 5th floor. If I’m going to the 6th floor or higher, I’m definitely riding the elevator.

E: If you want to catch up with a friend: Sosnoff or 4th Floor Starbucks Lounge? (if neither – list where)
T: Neither. Other people like grabbing coffee, I prefer to grab a beer. Luckily there are a few solid watering holes around Stern that have been great to catch up with friends as well as get some studying done.

E: With Veterans Day coming up, what does being a veteran at Stern mean to you?
T: It means two things to me. First, it’s being a part of a very tight-knit community that is extremely supportive and very diverse. The Stern veterans have such varied background and are some of the most well-rounded people I’ve met. It’s an honor to be a part of the Stern vets community. Second, many of my classmates had never personally known any military veterans, so it has been fun getting to share my military stories and experiences with them.

Thanks for sharing your story, Todd! And Happy Veterans Day, everyone!