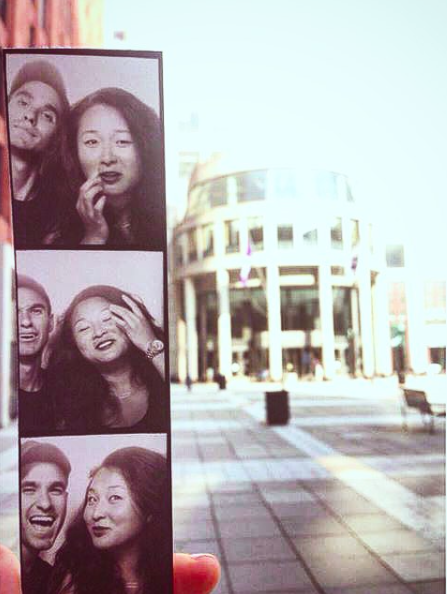 Hello everyone! September at NYU Stern means … navigating classes, corporate presentations, coffee chats, informational interviews all within the first few weeks of school. What is an MBA student to do during these exhausting and overwhelming times?

Everyone in business is familiar with the concept of a Board of Directors – a body of elected officials who oversee any major decisions of an organization. During my time at Stern, I’m a firm believer in the concept of nurturing a Personal Board of Directors – a group of friends that you can lean on during stressful times, share your excitement with when you get that first interview call-back, and someone to split that Lyft Line carpool fee with when going home after Beer Blast on Thursday nights.

I’d like to introduce everyone to Martin Lynch, a full-time MBA2 student at NYU Stern and one of my dear friends. Go grab a snack and join us in our coffee chat below!

Above: A picture that perfectly captures my friendship with Martin

Evelyn: Hi Martin! So can you tell the readers how you and I first met?
Martin: We met on the first day of LAUNCH orientation last year. Gosh, it’s hard to picture a time when we didn’t know each other! I knew we had to be friends after seeing your masterpiece crayon drawings during one of the more creative team-building exercises on the second day of school.

E: You were such a great help during some of our group projects together last year. Can you tell me what has been your favorite class at Stern so far?
M: This is a toughie, but if I had to pick one, I’d go with Foundations of Finance with Professor William Silber. On the first day, I was so intimidated by the subject matter and some of his classroom policies. For example, if you’re one minute late, you won’t be allowed in! But by the end of the course, I was totally hypnotized by him, and, surprisingly, also by the theories of finance. He has the most expressive voice of any professor I’ve studied under and he is so dedicated to making sure his students are able to grasp even the most complex financial theories.

E: You’re always walking around the halls with a smile on your face. What’s been your favorite memory at Stern?
M: My favorite memory at Stern so far happened last year when I heard from the Stern administration that they would be installing eleven gender neutral restrooms in KMC. Rachel Hurnyak (Class of 2015) and I approached Neil Rader, NYU Stern Chief Operations Officer, and Janet Lyden, NYU Stern Associate Director, to see if installing one gender neutral bathroom was a possibility. Neil said, “If we’re going to do one, why don’t we do one on every floor?” The turnaround time on this project was remarkable. This experience reaffirmed all the reasons why I chose to come to Stern.

E: As a friend, I know better than to talk to you before you’ve had your coffee. Where is your favorite local coffee spot around Stern?
M: Box Kite Coffee on Avenue A and St. Marks Place. Coming straight from the mouth of a total coffee snob: the coffee there is just ridiculous…ridiculously good!

E: Complete this sentence “When I have 30 minutes free on campus I like to …”
M: Find my friends and shadow them! It’s very exciting how each individual at Stern has so many cool things going on. Whenever I have a free moment, I love to walk around campus and catch up with them. It usually ends up being 30 minutes of me saying, “Oh my gosh” “Whoa” “No way!”

E: Quickfire question time! Getting to class, do you take the school elevator or the stairs?
M: I will never understand how the elevators at KMC work, so I stick to the stairs. My glutes and quads are so thankful for the confusing elevators.

E: If you want to catch up with a friend: Sosnoff or 4th Floor Starbucks Lounge?
M: Neither! I love the alcove in the lobby. It is so much fun to catch up there and also squeeze in some high quality people watching.

E: If you need to study: Stern Quiet Room or Bobst Library?
M: Quiet room for sure. Bobst feels far too overwhelming!

E: Where did you intern this past summer? What did you like the most about it?
M: I interned at a food tech startup, Freshly (www.freshly.com). Prior to Stern, I had worked in larger-sized companies and it was so neat to be able to get exposure to a smaller, more entrepreneurial environment. Also, working at a food company meant a lot of food tastings! I’m now a budding food critic.

Hope everyone enjoyed meeting another fresh voice at Stern! Who will I pick next? What cool story will they have? Stay tuned for my next coffee chat series!